WHAT DOES TENAGA NASIONAL BERHAD LOOK FOR IN ITS JOB-SEEKERS?

HINT: IT STARTS WITH THE LETTER "S".

TNB is like a river: We provide the water and it’s up to those who are thirsty to seek us out.

What do millennials want in a workplace? They want to work in a place that is vibrant, invigorating, gender neutral and constantly challenges them.

One such workplace is a company that is a household name in Malaysia: Tenaga Nasional Berhad (TNB). Datuk Seri Ir Azman Mohd, CEO of Tenaga Nasional Berhad, is all for making work a fun place. “If it makes people more productive, then why not?” he asks. TNB is also one of the best places to work because of its long tradition of providing a steady and secure career, claims Azman. “Once you join us, it’s like becoming part of a family,” he adds.

He adds that TNB provides many opportunities for its workers to upskill and upgrade themselves.

Like TNB’s Leadership Development Centre, which identifies potential leaders and helps groom and train them. There’s also TNB Intergrated Learning Solution (ILSAS), which is an integrated learning solution centre, and Universiti Tenaga Nasional (UNITEN) for those who want to advance their education to the tertiary level. The company also offers scholarship to those who want to do their MBAs.

“We want job-seekers who are thirsting for success. TNB is like a river: We provide the water and it’s up to those who are thirsty to seek us out.” 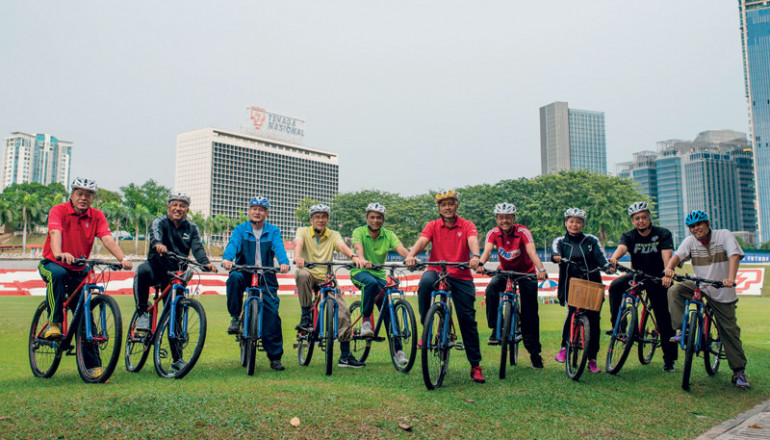 Do You Have What It Takes?

“What I look for in fresh graduates are those who are not only good academically, but it’s more important that they have the right attitude,” says Azman. Humility is important because they must be willing to learn and willing to admit they do not know everything.

Also, academic knowledge will be obsolete within six months. Workers must be prepared for a steep learning curve, as TNB aims to bring them up “to industry excellence”. They must be quick to learn and grasp things.

“Integrity is also very important,” says Azman. In fact, it is one of the hallmarks of a good leader, he says.

Certain jobs within TNB require high academic qualifications, especially those related to regulatory needs. “But this does not mean we only hire first-class honours students. We also hire those with diplomas and who like working with their hands.”

Azman is also proud of TNB’s tradition of promoting sports and fitness as tools for strengthening the worker’s mind, body and spirit. TNB has 65 top-class gyms all over the country with qualified in-house gym trainers.

TNB also provides futsal courts, badminton courts and a swimming pool at its campus in Universiti Tenaga Nasional (UNITEN). The university boasts an equestrian centre for those who like horse-riding. The TNB field is used as a venue for football, hockey, netball and to host events like family day. In addition, there are also healthy cafes scattered around TNB offices all over the country serving healthy and nutritious meals.

All these are part of the company’s emphasis on total wellness. It will be difficult to find any other company in Malaysia that provides such comparable facilities for its employees.

Azman believes sports help to break down barriers between superiors and juniors, and promotes team spirit and competitiveness.

“You get to know people better in the sporting arena. When I am on the badminton court, the workers, especially those from the lower ranks, see another side of me and I feel closer to them. We feel more at ease and it creates a sense of camaraderie. In the sporting arena, we are equal. I can’t recall the number of times women have beaten me in badminton,” he says with a laugh.

TNB also provides clubs for women, such as Pelitawanis. The company recognises the importance of family within the organisation and that women are the main carers.

“There is non-gender bias in our organisation. In fact, I would go as far to say that it is one of the best companies for women to work in,” states Azman.

“We have women VPs and senior executives (C-suite). We also provide top-notch facilities for women, such as nurseries, nursing rooms, dispensaries, etc. We have diversity at the board level. For any company to move forward, it needs everybody’s contribution, man or woman.”

Find out what these corporate leaders’ first jobs were!

Build Your Leadership Skills (and be noticed for it!)