He graduated much later than most of his friends. Today, he?s one of the top guns in his company!

Are you a late bloomer? If yes, don’t worry, says Mohd Najid Yahya, Chief Human Resources Officer at Felda Global Ventures Holdings Berhad (FGV). “I started my tertiary education much later than my friends,” Najid says. He went to the Royal Military Academy Sandhurst in the United Kingdom in 1984 after completing his secondary schooling in the Royal Military College in Sungai Besi. At ­Sandhurst, he earned a Standard Military Course (SMC), which is the equivalent of a bachelor’s degree. Najid, an army officer for about 14 years, only pursued his tertiary education later, starting with a postgraduate diploma in management science at the National Institute of Public Administration (Intan) in 1995 before joining the corporate world. In 1998, he started a double diploma in human resources management at Universiti Malaya.

“I only started my tertiary education after working and settled on this career path after several years of working,” says Najid. All his hard work finally paid off when he held several top posts in some established companies, such as Standard Chartered Bank, Sime Darby, Al-Rajhi Bank, Maybank and FGV. 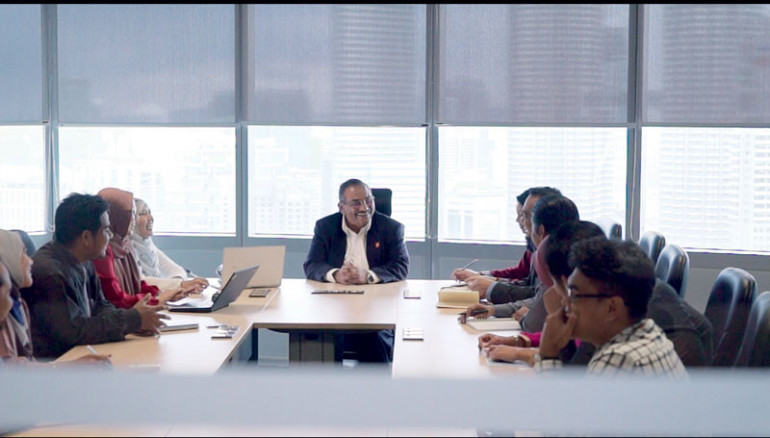 As someone whose own resume is dotted with various corporations, GRADUAN® asked Najid about job loyalty. He says job-hopping doesn’t necessarily mean disloyalty, as employees get to experience a different working environment and culture. “You will be able to view things from different perspectives and later contribute your experience to your future organisation.” However, he points out that it may not apply to everyone, as there are some people who excel in their careers despite remaining at one organisation. “I personally think there is no right or wrong answer here but I’m just offering myself as an example. I don’t stay put in a company for too long but I still reached where I am today.” “If you are good at a certain thing, you have that extra bullet to present yourself. When I decided to leave the army, I knew I could do better in the corporate world.”

“I always believe in having a contingency plan. If one doesn’t work out, you have other alternative ways as a back-up because I don’t believe in failure.”

AIM TO IMPROVE YOUR PERFORMANCE

“I always tell myself I can do better and improve a certain process of work. If it takes one week to accomplish a process, I will try to challenge myself to complete it within three days.”

“I work hard and set my career path, such as reaching certain milestones at a certain age, and I normally achieve it earlier. For example, I wanted to become Head of Human Resources before I reached 50 but I achieved it at the age of 45. So, it’s a bonus.”