Proton Plans To Win Our Hearts. This Is How They Are Going To Do It!

Proton’s factory in Tanjung Malim will be expanded to build a million cars per year. Imagine the jobs we will be able to create

One can sense the buzz of energy at PROTON’s Centre of Excellence Complex in Shah Alam. Ever since it was announced in May 2017 that DRB-HICOM, the parent company of PROTON, has signed an agreement with Zhejiang Geely Holding Group Co Ltd whereby Geely would take a sizable stake in PROTON, everyone is excited to see how this partnership can benefit PROTON.

Abdul Rashid Musa, VP, Sales and Marketing of PROTON and CEO of Proton Edar Sdn Bhd (PESB), is optimistic about the future of Proton cars not only in Malaysia but in the region and the world. PESB is the wholly owned subsidiary of PROTON, which is involved in the distribution of Proton cars and providing sales and after sales services to customers.

“We cannot stop the liberalisation of the economy; we have to be independent and competitive,” says Rashid, who was appointed the CEO of PESB in February 2017 and Vice President, Sales & Marketing of PROTON in October 2017. Industry watchers agree that this new partnership marks the beginning of a new era for PROTON as it will set the company on a path of expansion like it has never seen before.

“Without a huge increase in the volume of sales, we cannot lower the price of the car,” explains Rashid. “Our partnership with Geely will give PROTON the economies of scale and access to new technology – Geely owns the premium brand Volvo and has a huge R&D division. PROTON will be able to incorporate the new technology from Geely into its cars, and expand and utilise the capacity of our factory in Tanjung Malim in a very big way. Our factory in Tanjung Malim will be expanded to build a million cars per year and it will be Geely’s manufacturing hub for the ASEAN market. Imagine the jobs that we will be able to create.”

To put this in perspective, he explains further: “Geely exports its cars to 23 countries. PROTON was not able to have a significant presence in other countries and we were mainly reliant on the local market. There’s only so much that we can expand in Malaysia. In 2016, we sold around 72,290 cars; Geely plans to expand the sale of Proton cars to 500,000 in Malaysia and around the region in 2020! 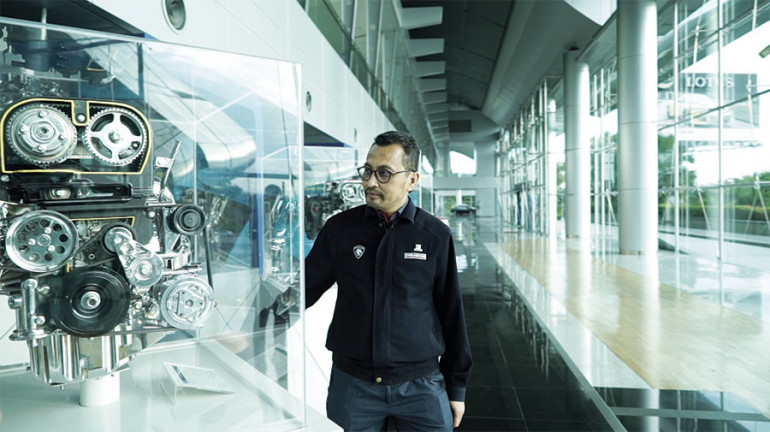 Bringing Proton Cars to the People

Rashid, who has more than 27 years experience in the automotive field, was previously the Chief Technical Officer of PROTON. His move to PESB was challenging as he was very involved in the engineering aspects of the car rather than the sales. “Between engineering and sales, it is more challenging to be in sales than to make cars!” he says with a laugh.

One of his most important objectives is to increase the sales of Proton cars. To do this, PROTON had to change people’s perception of its cars. “People are still talking about the power window problem that Proton used to have,” explains Rashid. “They don’t realise that PROTON has undergone a huge technological shift. We have moved from Japanese technology to incorporating the best of German technology into our cars. Our vehicle safety features are world class. Many technical features of the car are not visible to the people.”

PROTON also changed the way it was selling cars. Instead of waiting for people to come into its showroom, it decided to bring the cars to where the people are – the shopping malls. “We are more visible to the public now because of our presence in the shopping malls. Our sales team have been retrained to be very well versed in the technical aspect of the cars. We display the cars, invite people to test drive it, encourage them to ask questions, we have our half cut cars where people can see the technical details, we have safety videos to explain things to people. In short, we are far more engaging with the public about our cars.”

Proton is also working on technology to improve how it communicates to people. It has launched an interactive app via the smartphone where people can use the app to book appointments for service without having to call in. “We cannot rest on our laurels and we need to continuously look out for opportunities and prospects because our competitors are also working hard.”