Everything that happened at the Malaysian Career Fair 2019

A whole lot of happy faces at this year’s annual career fair in the UK!

“GRADUAN® has been a key source for Malaysian students and graduates to plan their career path forward. We recognise the leadership of Managing Director Puan Elia Talib in their steadfast commitment to support UKEC in organising The Malaysian Career Fair.”- Dato’ Seri Azmin Ali

From 6 to 9 April, GRADUAN® hosted its annual Malaysian Career Fair in collaboration with the United Kingdom and Eire Council of Malaysian Students (UKEC). Nearly 40 top Malaysian organisations looking to hire the best Malaysian talent studying in the United Kingdom took part in this fair, which took place in the Royal Lancaster Hotel in London.

GRADUAN® was proud to have the Minister of Economic Affairs, Dato’ Seri Azmin Ali, officiate the 15th GRADUAN-UKEC Malaysian Career Fair. In his keynote address, he said: “GRADUAN® has been a key source for Malaysian students and graduates to plan their career path forward. We recognise the leadership of Managing Director Puan Elia Talib in their steadfast commitment to support UKEC in organising The Malaysian Career Fair.”

The event also hosted a Corporate Luncheon on 6 April which was attended by 150 Malaysian talent in the UK and CEOs of the top Malaysian employers in a casual dining setting. A forum titled “A Shift in Perspective: The Asian Century” also took place simultaneously.

For the first time, GRADUAN® and UKEC in collaboration with Maybank held the #UnconvinceYourself forum featuring successful female leaders as our panelists.

Here’s an overview of what happened at each event. 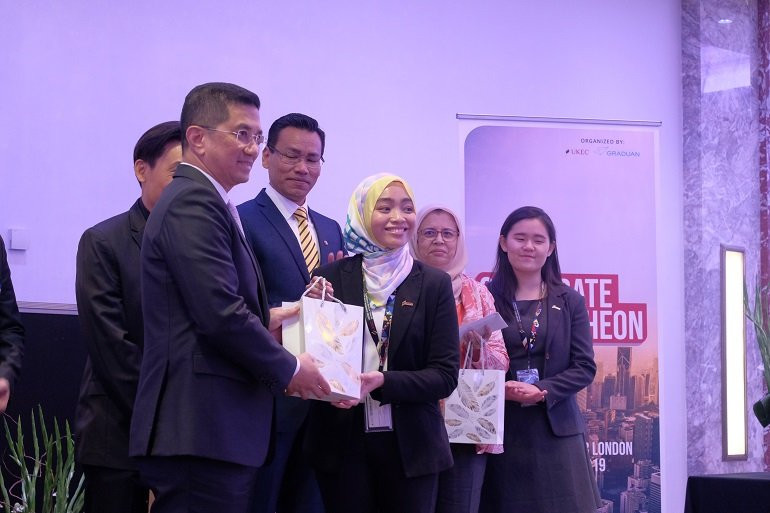 The Corporate Luncheon, an annual event that gathers the cream of the crop of Malaysian talent with CEOs and hiring managers was met with praise by the Minister of Economic Affairs who described it as “a clear display of Malaysian students’ employability and soft skills particularly in communication skills, critical thinking and cognitive capability as well as adaptability.”

The forum of the day, “‘A Shift in Perspective: The Asian Century”,’ saw panelists from Maybank, Mah Sing, Samsung, UOB and KPMG compare Western markets with their Asian counterparts while also exploring the full potential of ASEAN region.

"The topic for the forum is very relevant and also quite heavy but I think it will bring the right kind of values to the participants because it’s about whether the Asian Century is already beckoning. The talents present today were very articulate; they know what they want. They were also very bold and courageous so I’m very encouraged by the quality that I saw here,.” said Chen Fong Tuan, HR Director of Samsung Malaysia, about the luncheon.

Career Fair
The Royal Lancaster Hotel in London was packed with thousands of Malaysians on 7 April as they came looking for the opportunity to kick-start their careers. Nearly 40 companies were on the hunt for the best talent and they were not disappointed either.

“PwC has been with The Malaysian Career Fair since it started in 2005 and I’m really pleased to see that it has grown over the years. From less than 10 employers, we have close to 40 now. The crowd has also expanded to more campuses outside of London and there’s a more diverse pool of talent. During our info session, there were many students coming from non-accounting backgrounds so that’s really great and very encouraging. Well done to GRADUAN® and keep up the great job!”

The #UnconvinceYourself Forum
For the first time at the Malaysian Career Fair, Maybank – in collaboration with GRADUAN® and UKEC – hosted the #UnconvinceYourself forum that addressed issues women face at the workplace and how they can rise above it. The panelists of the day included Animah Kosai, Founder of Speak Up;, Ayman Hazwani, first- ever female Chairperson of UKEC;, Puan Elia Talib, Managing Director of GRADUAN® GRADUAN and Puan Nora Manaf, Group Chief Human Capital Officer at Maybank.

“We often find ourselves convinced by certain perceptions and limitations. #UnconvinceYourself is a space curated with the aim to have individuals to unconvince and unlearn things about themselves to experience things beyond the usual. No other platform is better than GRADUAN® to do this with as we both aim to realise our aspirations. Stay tuned as the second instalment will be in KL soon!” said Sophia Ang, Head of Talent Attraction and Workplace Futurisation at Maybank, of the forum.

“I learnt a lot about of good interpersonal skills, the networking opportunities were extremely priceless because of all the prestigious companies located in one convenient place for all of us.”

"As a student studying in the UK, we don’t get that much exposure as compared to those studying and living in Malaysia. The career fair not only helps us land jobs or internships but we also get to meet a lot of companies and to open our minds to a lot of different opportunities.”